Few MOTHERS CANINE of the different breed dogs existing in the world, have a Security Control Service as high (if any) like the American Dog Breeders Association (ADBA) has for its breed, the American Pit Bull Terrier. Very few fans of dogs in general know this information, there are even very few who know it even being fans of this breed. For this and other reasons, I thought it important to make a report to publicize this great job and security service that ADBA offers, which guarantees fans that the breed's purity will be maintained. Also I seemed it important and fair to make known the effort that exists behind this subject, effort made by the members of the ADBA to keep alive this noble and wonderful dog breed, ensuring that it does not become extinct, as has already happened long ago with some breed dogs because of indiscriminate miscegenation without control. 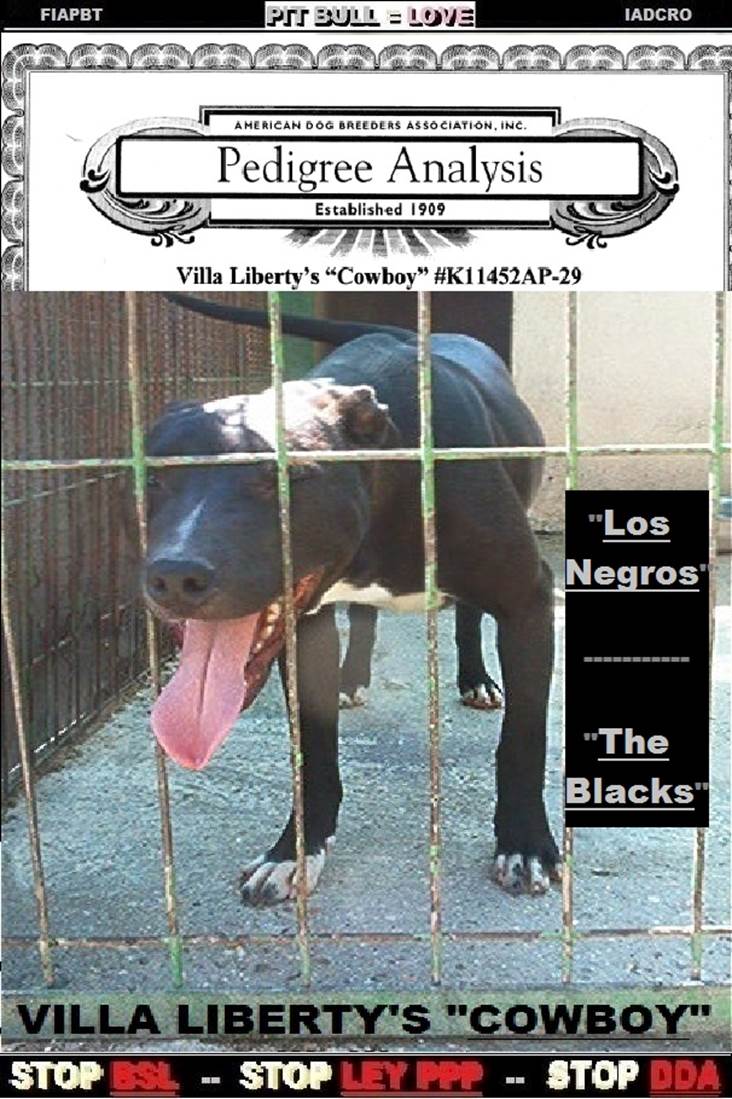 In the ADBA exists a Investigation Department to check the pedigrees veracity, by contacting breeders directly, if is required in the veracity of some pedigrees, something that no other organization does. The ADBA has a fairly definite computer control, to avoid the pedigrees falsification. Needless to say, the service that the ADBA has within its DNA DEPARTMENT with the DNA tests, and also the Pedigree Analysis service that offers, ´It is EXTRAORDINARY!!! ´Thank you!!! 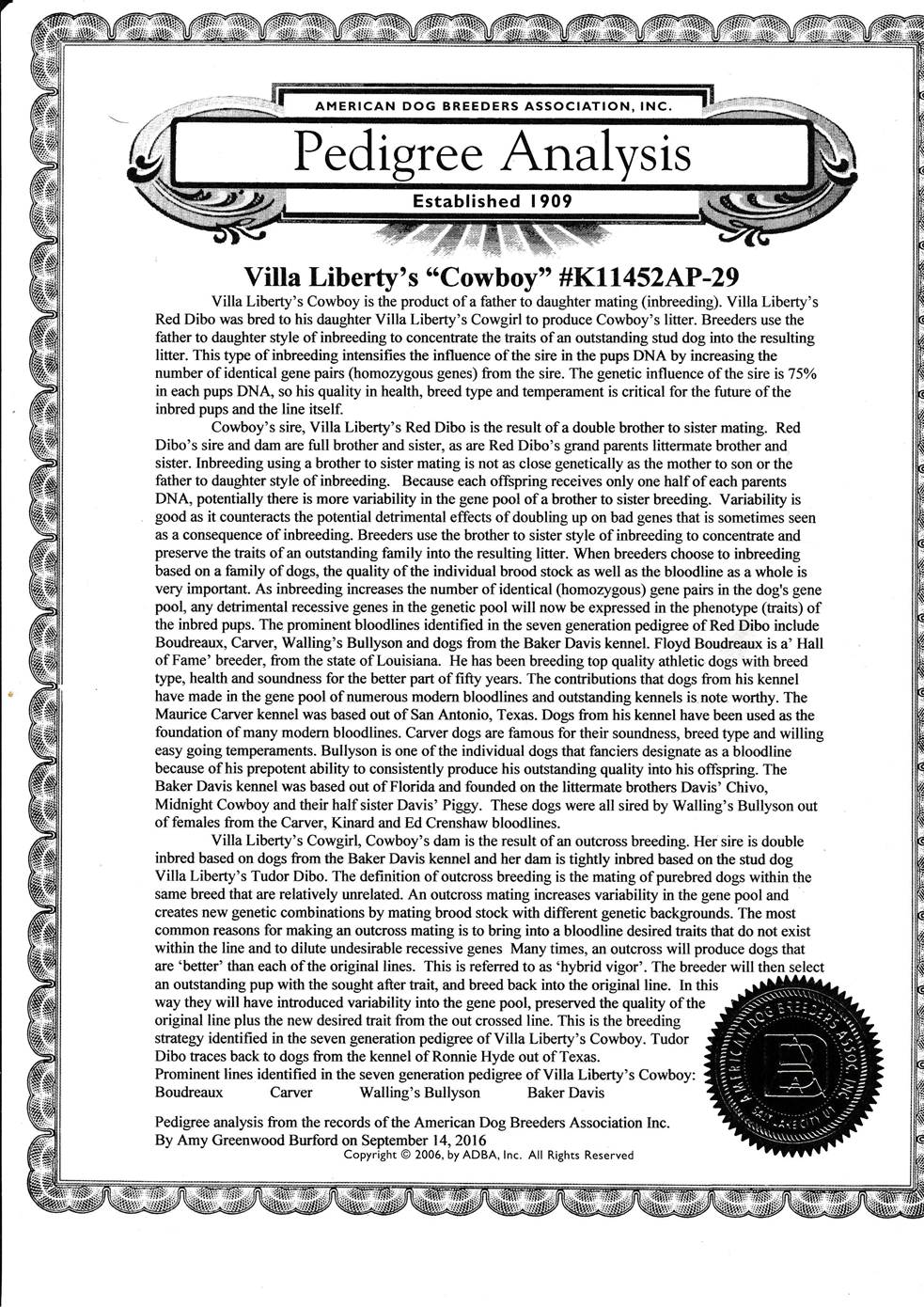 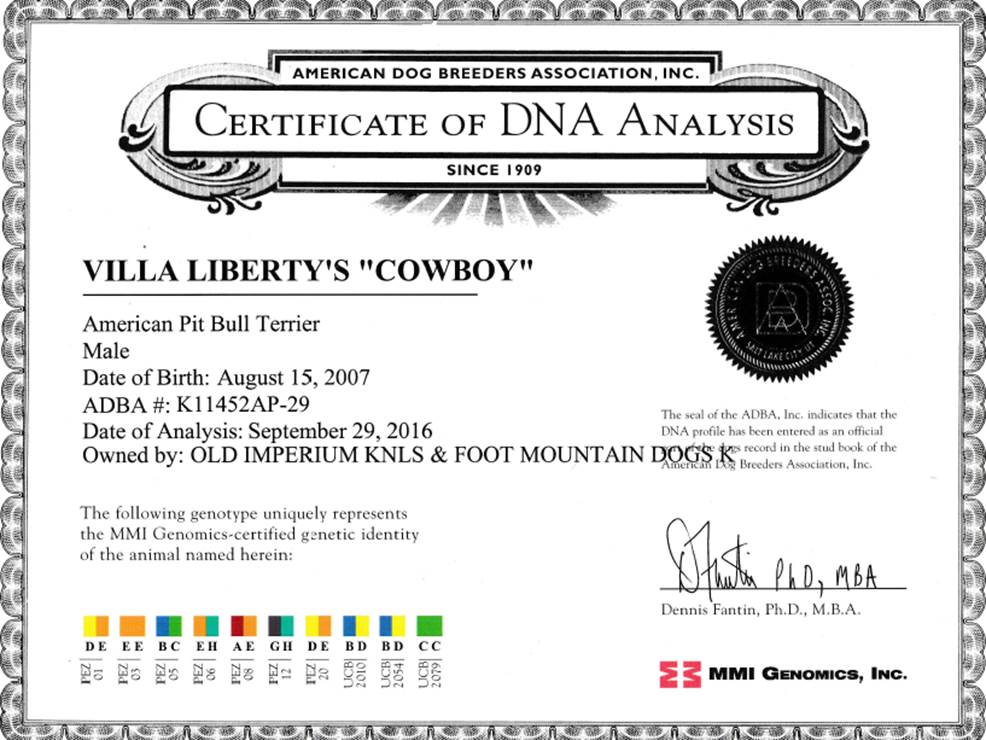 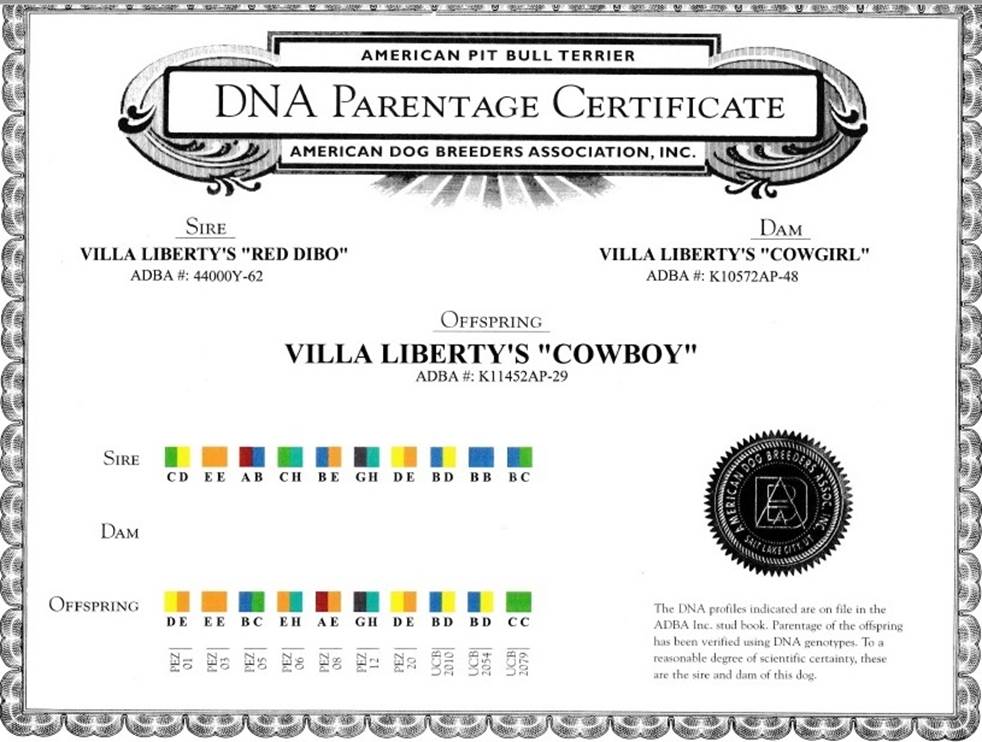 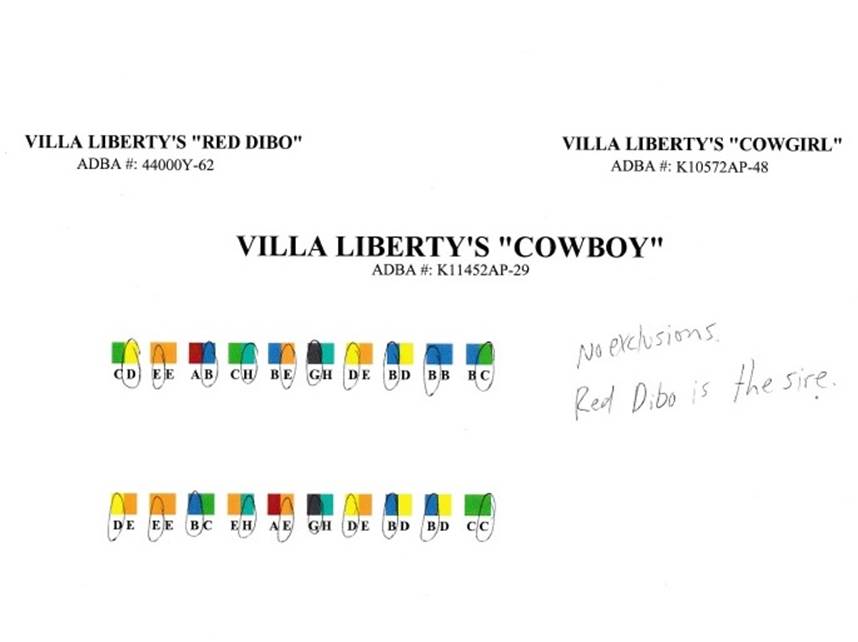 ACTION and REACTION (Cause and Effect) of the GENETIC CONSANGUINITY Tool

The genetic Inbreeding is a tool like a knife of double edge, which can give very good results in the breeding for the connoisseurs of this tool, or on the contrary give mediocre or disastrous results for those who do not take it into account and they use it at random, without any knowledge or experience of that tool.

If know how to take an adequate Well-considered Action when selecting the reproducers, the Reaction or the Effect on the offspring can be extraordinary when using the Genetic Inbreeding Tool, especially in those cases in which the tool is known and knows how to use it properly.

When the experienced and honest breeder wishes to improve the quality of the dogs that he owns, joining the good intention of the purpose or goal of improving the purity of the breed itself, this tool is essential to be used. The actions carried out from the Knowledge, the Heart, the Truth, the Enjoyment and the Good Intention, very difficult is that it do not go well.

The Genetic Consanguinity being a tool like the knife of double edge, should never be used opportunistically justifying it with stupidities as for example; "In the time of covering the female, the owner only had the brother to cover her", nor at random; "To see what comes out", by breeders who are beginners, opportunists or inexperienced in this tool, since the price of the result can sometimes be quite negative for everyone, especially for the doggies. 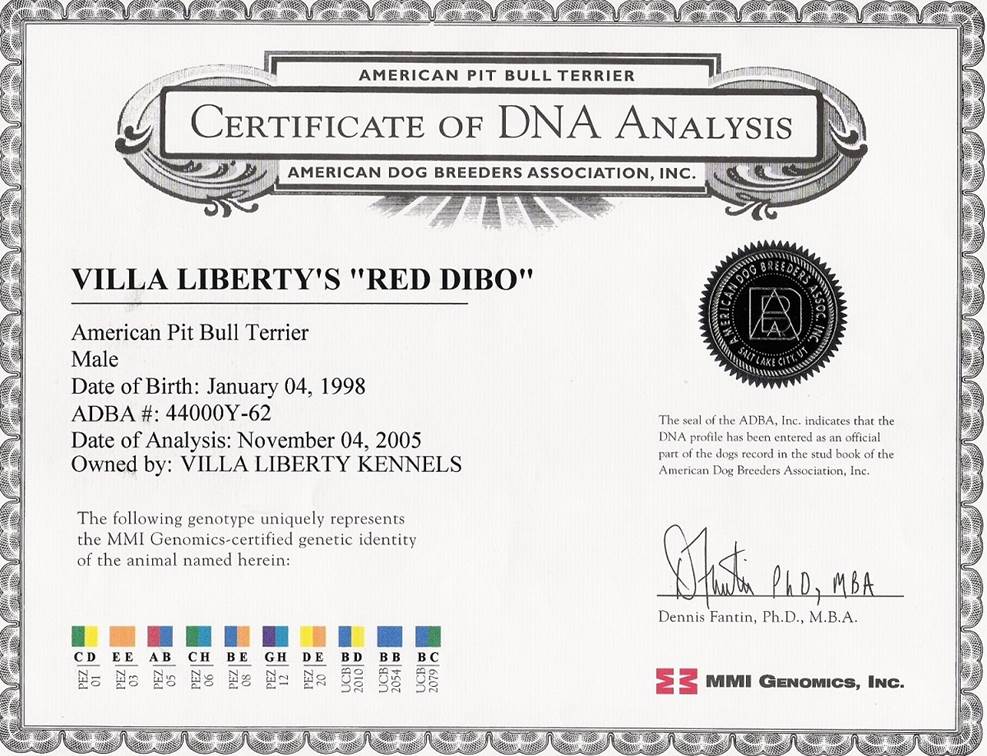 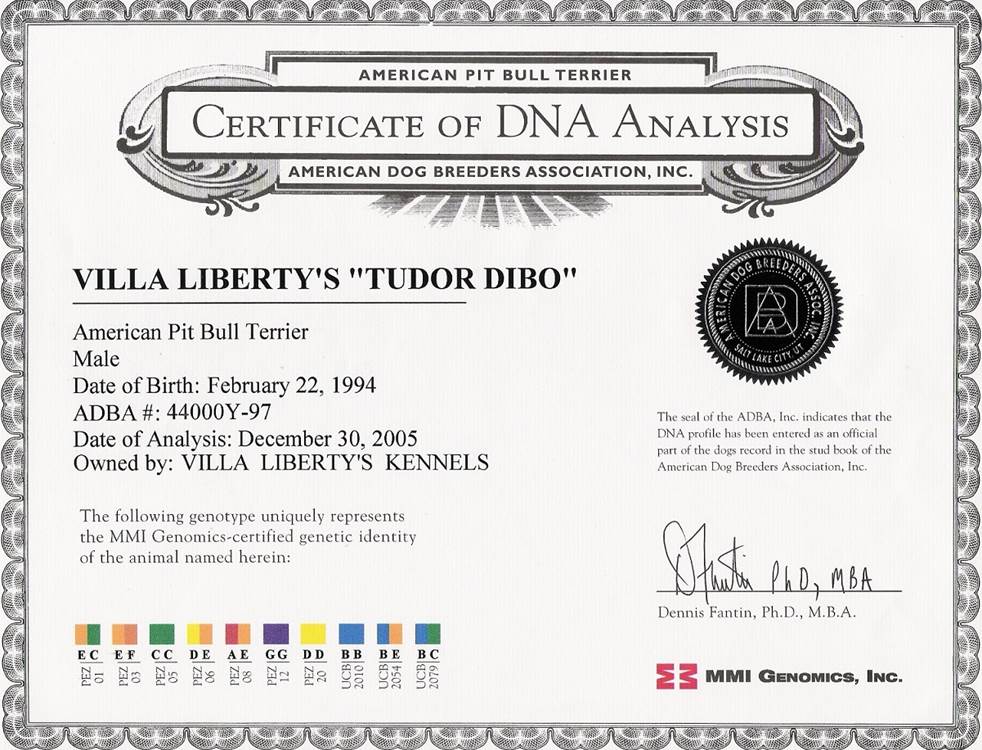 The only American Pit Bull Terrier (APBT or Pit Bull) Oficial Pedigree to International scope, is the Pedigree of the American Dog Breeders Association (ADBA)

The ADBA, never has kept in mind the esthetics of the American Pit Bull Terrier, what has always valued more than the APBT in its breeding selection, has been the heart and the behavior in all the senses, not keeping in mind at all the beauty or esthetics. Consequently to it, to given place that this breed dog follow conserving the values originals for which was created already 500 years ago and be this the great difference that exists nowadays among the APBT and the other breed dogs. For all the good work about conservation of the pure breed by the ADBA, the FIAPBT in the year 2000 to called the ADBA like the Canine Mother at International scope of the breed dog American Pit Bull Terrier. 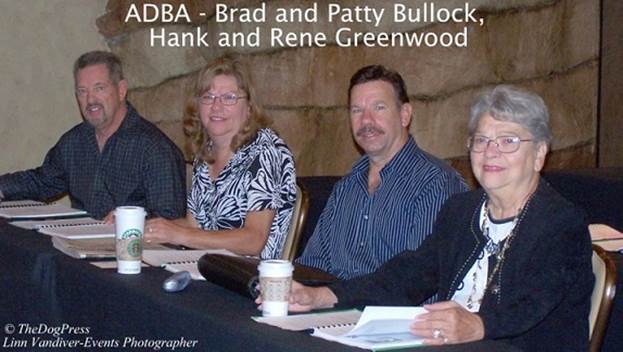 Pit Bull Pedigree (papers) = ADBA = Pit Bull Canine Mother at International scope = Pedigrees control and not validate false Pedigrees = Excellent and honest ADBA job trying to keep the TRUTH and maintain alive the Official Genealogy of the breed in over the time = Keep alive Officially the Pit Bull defence in various aspects, so that the children of our grandchildren will can continue to enjoy these wonderful animals when the time comes. 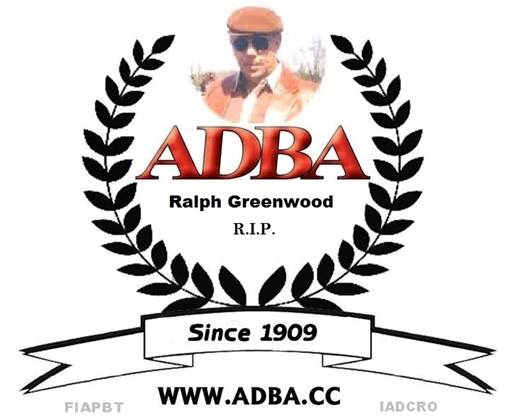 THE DUTY OF THE AMERICAN PIT BULL TERRIER GOOD BREEDER

The big problem today is that the American Pit Bull Terrier in different countries, as you know, is engaged Laws inducing to kill our beloved breed dog. This occurs, because observing our breed dog like if mixed dogs were addressed precisely by ignoring possessing International Official pedigree and this is the ADBA pedigree.

The ADBA has developed a great job control, conservation, promotion and defense of the breed that can not go unnoticed. The ADBA has a very good reputation because the honesty of the people who run it, the Greenwood family.

In 1909, was founded the American Dog Breeders Association (ADBA) and for their good work in preserving the original American Pit Bull Terrier, got that today is recognized like the APBT Canine Mother in International scope, for not have gave in the course of the years a single step back, in the authentic, pure and original APBT be, and the fans recognize and appreciate it.

But to say that the ADBA after an investigation and if this is favorable, validate pedigrees of other organizations (UKC, IKC, BFK , “SDR”, etc..) how ADBA pedigrees and the FIAPBT also approves those approved pedigrees, by simply knowing who were investigated before being accepted by the ADBA. 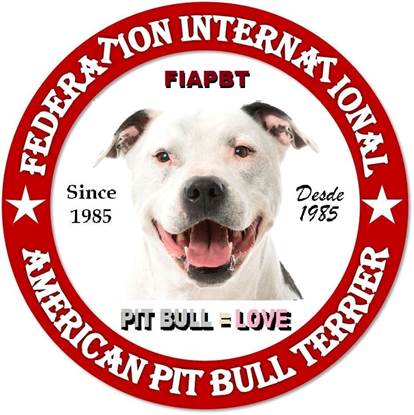 In the FIAPBT eyes, the ADBA is the institution that offering pedigrees with more credibility that other organizations that also offer pedigrees.

In the FIAPBT we understand, that be needed to properly promote the breed and then just make a proper defense of it, to those Governments that continually attempt to exterminate the APBT and this is precisely why it is so important that we promote the breed in parallel with the ADBA pedigree, so that they understand that government institutions are dealing with a breed dog like any other and should not take unwarranted action by the fact believe they are mongrels, having been ill-advised and deluded on this issue, for those who they are in front of the dog world in their country and these same people are mostly anti APBT and want the destruction in their country of the APBT, to regain popularity and sales in their respective breed dogs, superseded in nowadays by the APBT. The best way to trick to the Government people, is precisely wrong advising them referring to our dog breed with contempt and discriminatory attitude, how if it will be a very dangerous group of mongrel dogs very dangerous with the people, or at most a functional group, which becomes dogs the same as mixed dogs. They also claim, that the dogs of our breed are for criminals people and other similar nonsense without any zootechnical rigor to support it.

WORKS THAT MAY BE WOULD BE OF YOUR INTEREST:

@ Whence comes the black color to the ELI / CARVER / BOUDREAUX dogs, being that they are all Tudor's "DIBO" family and "DIBO" was buckskin color? - THE HENRY DOGS: www.fiapbt.net/black.html

@ GENETIC OF THE LEGEND TO CALLED“ MAURICE CARVER” AND TRIBUTE: http://www.villaliberty.org/legend.html

@ AMERICAN PIT BULL TERRIER with Pedigree ¿Yes or No?: www.fiapbt.net/pedigreeyes.html