(This Web site may be deleted at any time for those who are against the FREEDOM, the DEMOCRACY and the TRUTH, like has recently happened. We will try to keep it for as long time as we can. For this reason, we recommend to you that you save the information in your own computers which appears here and would interest it to you before it could be re-deleted, and if you could share it, best for everyone, best for you, for your loved ones and especially best for the JUSTICE, the FREEDOM and The TRUTH)

@ DOCTORS and HEALTH PEOPLE are collaborators and accomplices of the global GENOCIDE: https://www.fiapbt.net/medicalpeople.html

@ THE PLANDEMIC WAS PLANNED FOR MANY YEARS AGO:

@ And after the PLANDEMIC? https://www.fiapbt.net/andnow.html

Hello friends, I would like to deal with an issue that, in my opinion, is quite important to take into account, since, if it were not taken into account, the current reality would be quite distorted to the detriment of those of always, the citizens, but in this case multiplied per thousand.

The matter in question is that not long ago, a few months, no more, relevant news related to a health issue that encompasses us all, a "Black Hand", in a subtle way and from the shadows, with absolute control of all Internet tools have completely misrepresented what actually happened, news, which can be easily found on the Internet, through its various tools, such as Google, Facebook, YouTube, etc., in this way. way, being able to find out about all of them, news all of them related in one way or another to the vaccine, especially news of suicides of scientists and doctors involved with the vaccine and the declarations of the knowledge they had acquired by studying the vaccine in different facets, which that they had discovered after having carried out their respective SCIENTIFIC investigations regarding vaccines, especially the components that they had discovered within them s, such as; Ribonucleic Acid (RNA), Magnetic Metals; Neuro transmitters; Nano Technology, Nano Chips, GRAPHENE Oxide, etc. 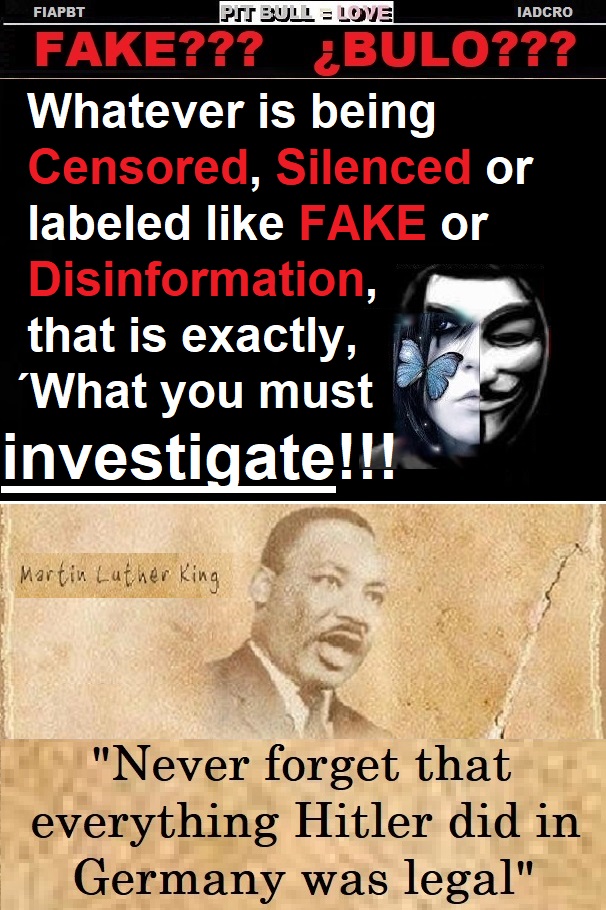 The point of this message is the following; I imagine that some of those who are reading these lines, will have realized that until recently, news did not appear on google deliberately adding RECTIFICATIONS of specific news, huge and exaggeratedly highlighted words such like “FAKE”.

Curiously, this type of rectifications and terms such like “FAKE” have appeared just at the moment that the elite has needed it, in this way, to hide and mask their shit through CONFUSION, closing the mouths of the Scientists and HONEST Doctors murdering them to make sure they don't speak again, and later, when someone has reported the crime on the Internet, that "Black Hand" has rushed to rectify said information with the term “FAKE”, as the news happened with the director of the most important hospital in Germany, which was murdered by throwing him out the window into the void: https://noticierouniversal-com.translate.goog/actualidad/el-director-del-hospital-mas-importante-de-alemania-muere-tras-saltar-al-vacio-desde-la-azotea-del-edificio-luego-de-admitir-que-las-vacunas-son-una-estafa?_x_tr_sl=es&_x_tr_tl=en&_x_tr_hl=es&_x_tr_pto=wapp

The same thing happened with the news of the crime of the Scientist and Doctor Andreas Noack, the person who DISCOVERED the GRAPHENE in the Vaccines, since for example, if you search for information on google about his murder, you will find the word “FAKE” so you don't think he was killed, or at least get your confusion about it.

Yes friends, reality is stranger than fiction. This case of the Scientist and Doctor Andreas Noack, you can check if you wish with your own eyes below:

Last images with life of the Scientist and Doctor Andreas Noack.

This reputed gentleman that you can see in this VIDEO: https://www.facebook.com/VILLALIBERTYKENNELS/videos/3085512321731743 Same VIDEO in Vimeo: https://vimeo.com/669989305 who is being quietly interviewed online, is the Scientist and Doctor of Chemistry Andreas Noack. This Scientist and Doctor also has a Doctorate in the specialty of GRAPHENE. This honorable Scientist, Andreas Noack, was the one who discovered that Vacc ines contained GRAPHENE OXIDE. Faced with such a surprise, from his CONSCIOUSNESS he felt the need to notify as soon as possible, in this way, to prevent the health of citizens and especially that of children.

The video shows the German police, who, after violently entering the house of this gentleman, shouting and breaking the doors of his house, aggressively ask him various questions, among them they ask him for his name They didn't want to make mistakes, they went for him. They put a kind of hood over his head, as if he were the greatest Terrorist in the world, and he is no longer seen more. A FEW HOURS after what you have seen in the video, THEY FOUND HIM ALREADY DEAD!!! They alleged that his death was due to cardiac arrest.

The recent unfortunate final outcome that the Scientist and Doctor Andreas Noack has suffered, has exactly the same patterns as those of many other recent death outcomes, which occurred "mysteriously" to other people; Scientists in various areas; Biologists, Chemists, Biochemists, Doctors, Professors, etc. These last unfortunates had in common with the Scientist and Doctor Andreas Noack, who, like him, publicly showed his Knowledge and his opinions under the SCIENTIFIC prism regarding the Vacc ine. All of them, scientifically demonstrated, as did his colleague the Scientist and Doctor Andreas Noack, the enormous inconveniences for health, to the detriment of the citizens to whom Vacc ine is subtly subjected. These public statements, did not like anything to those who are collecting and collecting as much as possible at the expense of the Vacc ine.

After this, a "black hand" has pulled the strings in defense of the Obedient German police, so that those who wish to seek information, regarding what has happened to the Scientist and Doctor Andreas Noack, find the following regarding Dr. Andreas Noak;

"The statement was described as false, since there is no record that shows that he was murdered, in fact the official sources assure that he died of a heart attack and that there was no involvement of third parties." (Sic)

You have seen the Video, you have seen the ways in which they entered the house, you know the importance of the information that the Scientist and Doctor Andreas Noack denounced, you know the enormous number of different interests that exist for the Vacc ine to continue throughout the world, now, it is also you who must draw your own conclusions regarding what happened with the Scientist and Doctor Andreas Noack, we are very clear about it, but we do not want to convince or prejudice anyone's opinions, we think that the Respect for Freedom of Thought is as important as respect for Freedom of Expression, which has been so unfairly censored in the last two years all over the planet, to the point that respect for individual and global FREEDOM in themselves, conspicuous by their absence...

News that appears the term "FAKE", well it will be that not so much...

Greetings, encouragement and go ahead, they are few and cowards.

@ Regarding the recent (MURDER) death of NOBEL LAUREATE IN MEDICINE LUC MONTAGNIER:

The Virologist and Nobel Prize in medicine, Luc Montagnier, against "vaccines" and dissident of the C0vid´s Farce in general, was going to testify this February 12, 2022 before the Supreme Court of Canada, in the Trial of Crimes against Humanity , popularly known as the second Nuremberg trial, Trial that is carried out against the Bilderbergs, the bankers who own the Financial Power, owners of the Pharmaceuticals and also against some of their collaborators such as Bill Gates, Pfizer, etc., etc. Well, precisely 4 days before testifying, specifically on February 8, ´THEY FOUND HIM ALREADY DEAD!!! Later, the disinformation media do not say the cause that he has died nor say anything at all, total occultism in the face of the death of an entire NOBEL PRIZE PRIZE IN MEDICINE, ´Really doesn't it smell strange to you??? 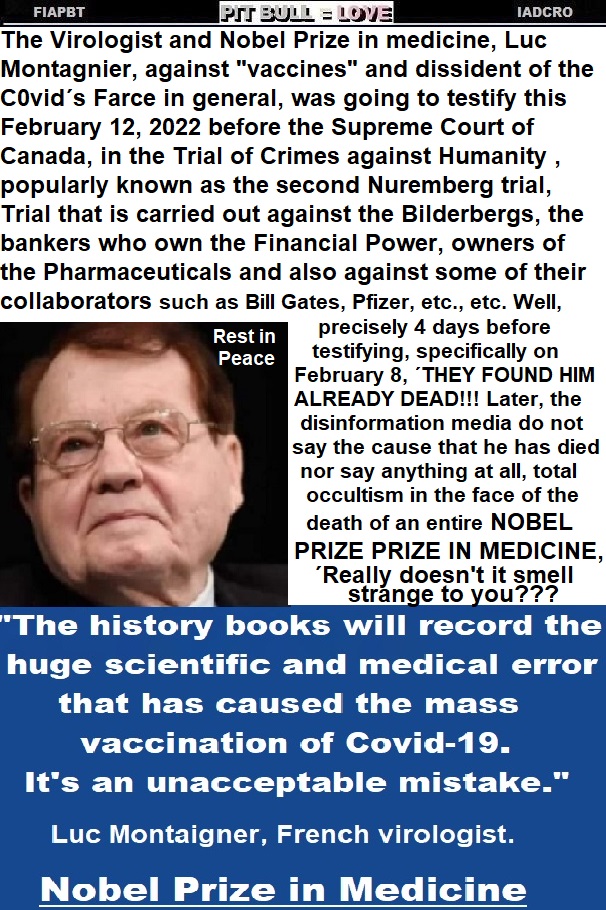 Everything looks like the elite white glover hitmen also have killed him, as they have done with countless scientists, doctors, teachers, etc. distributed throughout the world, who also told the truth, which made the genocidal bankers who own the pharmaceutical companies excessively uncomfortable, which are the ones who promote the global health crisis, then pull their strings to try not to leave a trace and I say try because they do nothing else to err and err, since the duster is being seen them too much and that, does nothing other than ignite the flame of indignation and of the Truth itself much more and here we have a great example; FAKE News??? https://www.fiapbt.net/fake.html And after the PLANDEMIC what? https://www.fiapbt.net/andnow.html

It should be known, that adrenaline, also known like epinephrine, is a Medicine and a hormone, which is used by white glove murderers to leave no trace of the crime. The effects of a high dose of intravenous or oral adrenaline in the body, cause infarction or cardiac arrest to whom it has been administered, and it should be noted that, 20 minutes after death, the heart of the deceased recovers its normal size, without leav a trace in the body of the supplied adrenaline, with which, in the result of the autopsy, the cause of the murder will be given as a natural death. This is one of the favorite systems of the genocidal elite of the West, as well as those of their colleagues and partners, those of the elite of the East, to eliminate those who discover the truth, which, to these genocidal gulfs they not want that the truth being disclosed in society, in this way, not harming or interfering in their plot of the development of their New World Order.

In addition to NOBEL PRIZE winner Luc Montagnier, other researchers also warn that C0vid vaccines may increase the risk of HIV infection: https://www.forbes.com/sites/roberthart/2020/10/20/researchers-warn-some-covid-19-vaccines-could-increase-risk-of-hiv-infection/?fbclid=IwAR3rRNX95T-IIu8w12siD690aglWgib_S4ZpmSeEmUiaBu-6Cr5QnDatWhA

@ “Hitler knew this very well, like his friends and associates the global elite in nowadays...

Humans are only capable of telling small lies and cannot conceive of big lies. Therefore, if you really want to hide something important from the population, deceive them with SUCH A BIG lie that, even if they discover it, they will not believe it.” (Hitler) 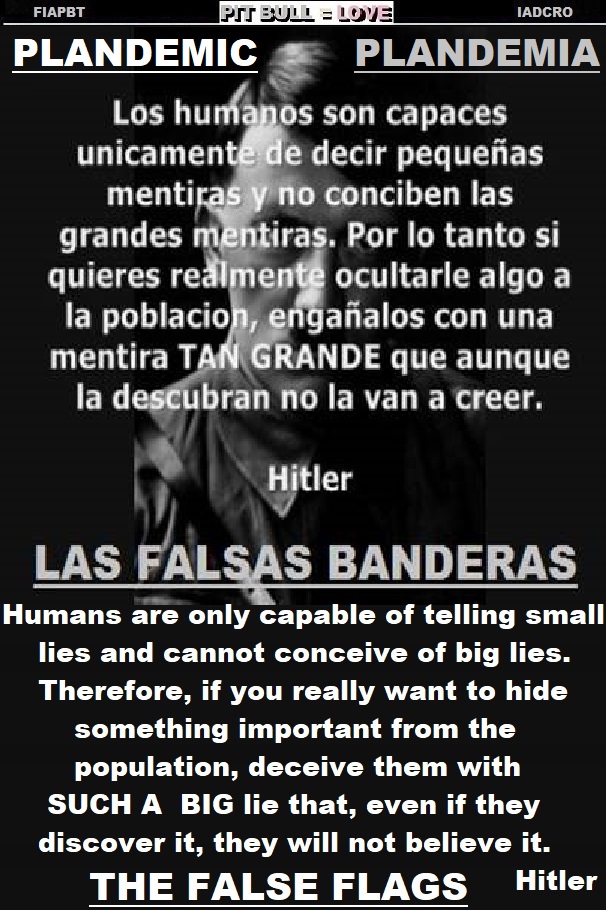 The holocaust that Hitler carried out is child's play compared to what these psychopaths have done, they have learned a lot and have surpassed their teacher. Luckily, there is very little time left, so that finally the entire Pharmaceutical plot of the genocidal Bilderberg and its collaborators comes to light, thus ending all this GENOCIDAL HOAX globally, later, many will have to assume their RESPONSIBILITIES for their actions, for the attitude that they have shown during what has happened during all this time and heads will roll, how could it be otherwise, but especially and so that these types of episodes do not occur again in humanity, we must go for those of above, the genocidal Bilderbergers, they have names and surnames, the cowards who hide behind Politicians, Businessmen, Bankers, Religions, the Media, etc., and from that place, from the shadows, in a sick and psychopathic way they scheme against humanity but not from now, no, for hundreds of years, they are the cancer of humanity, it is that they also perform blood rituals with young children, they also abuse them and those who get to live, they are traumatized for their entire lives, they are inveterate pedophile predators, they are satanic, they are the worst, they think they are masters and lords of humanity.

Many wonder why all these rabble live so many years.

In the following photograph you have the answer:

ADRENOCHROME. investigate it for yourself. 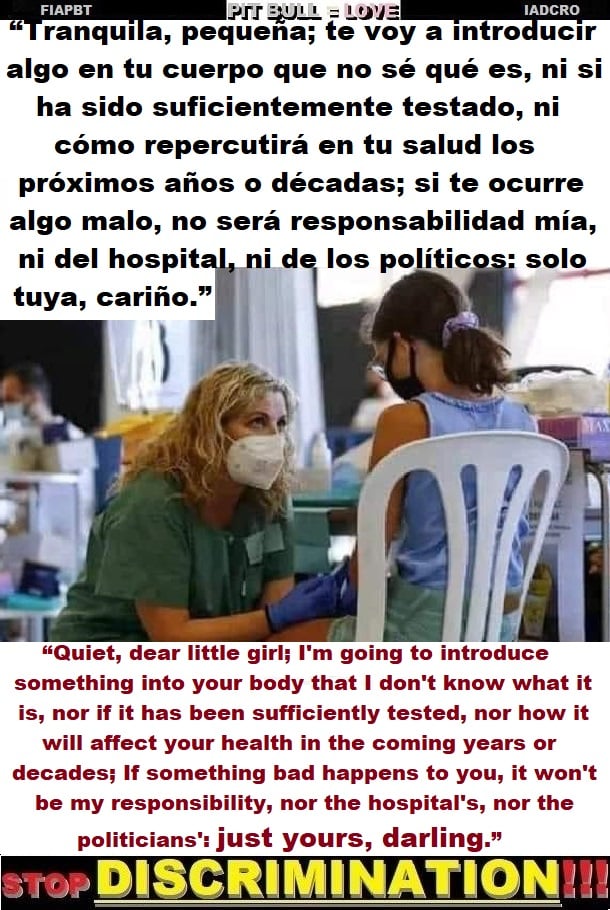