All dog breeds have admirers and detractors, all of them without exclusion of none. What for some people is a wonderful breed for others is cause for rejection.

But there is one particular breed that has never had so many enemies: the American Pit Bull Terrier (APBT or Pit Bull)

They are people who do not know the breed of anything and are influenced by what the Comunication Media Lies say. They fear the breed without knowing it at all and have not even bothered to investigate and with just the act of saying the name they become defensive, assuming that it is “non grata”.

Another of the enemies are the media that insist on discrediting this noble breed over and over again. They have discovered the “golden egg hen” for every macabre news they give about them, although for this they have to lie again and again without any scruples. They insist that Pit Bulls are always the ones who provoke attacks on people, dogs or whatever they put in front of them. These types of communication Media are potentially dangerous, as they influence the number 1 enemies that I have previously named.

They are always fluttering and take advantage of any news to blame the APBT.

Another of the enemies is inside the house, never better said, because they are the dog fighters. These are beings anchored in the past who think that this race wants to fight, or was raised for it. In reality they are only excuses that they make to continue doing their dirty, black and crawling businesses to earn money. A spotted and illegal money. The enemy number 2 takes advantage of the activities of the enemy number 3 also to insist that this breed is like that by nature and that is why it attacks every living bug that crosses its path.

The enemy number 4 is the irresponsible owner himself, a park child, who has this noble breed to show off in front of his friends that he has a dog that bites harder than anyone. He hangs it from the trees in front of everyone, swollen with pride and satisfaction and if the dog is faced with another dog, the child continues to swell his ego. The enemy number 2 returns to the scene and takes advantage of the situation to continue fearing the enemy 1

This is another of the most powerful enemies after the enemy number 2. Faced with the panic unleashed in the enemy number 1, the politician wants to win his vote easily, legislating without having a damn idea of ​​what he is signing, just to silence the number 1 and win your vote. It lives up to the saying that “the dog is dead, rabies is over” without knowing if it was really rabies or another illness but the dog has already been killed.

In addition, honoring his position, like any politician worth his salt, does not lose the opportunity to take an economic cut of that situation and converts that legislation into Recaudatory money, taking advantage of the situation to obtain economic benefit (of course!!!) See BSL & DDA Laws.

Here is another case of irresponsible owners who consent to the animal and do not know how to educate properly. They consent to everything and do not scold you when they should do it because "poor doggie". In the end, the dog ends up doing whatever he wants, becomes a rude spouse and becomes the head of the pack. The consenting owner thinks that it is because that breed is like that and not being able to handle the situation the poor dog ends up in the kennel or slaughtered. The number 1 enemy is right to himself that this breed is like that. The number 2 is on the prowl of its prey to give the news, the number 5 rubs its hands thinking about Recaudatory public money.

7. THE LACK OF UNION BETWEEN ALL WE HAVE AMERICAN PIT BULL TERRIER.

If instead of criticizing a hatchery or owner because their dog is prettier or uglier, or has better or worse genetics, we would all join in the really important, the breed, we could do something productive, we would not waste so much time by the way.

In other breed dogs if they are criticized, they all come together to defend it. It happened precisely with the boxer, but in our breed it seems that we are not very close and we are more focused on criticizing and discrediting others.

With all this I have realized that yes there are PPPs (BSL & DDA): 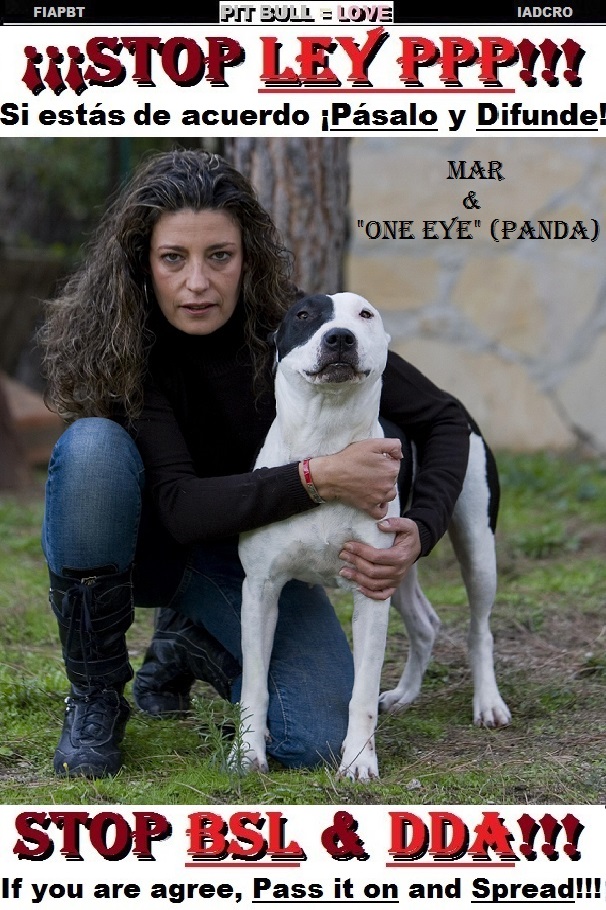 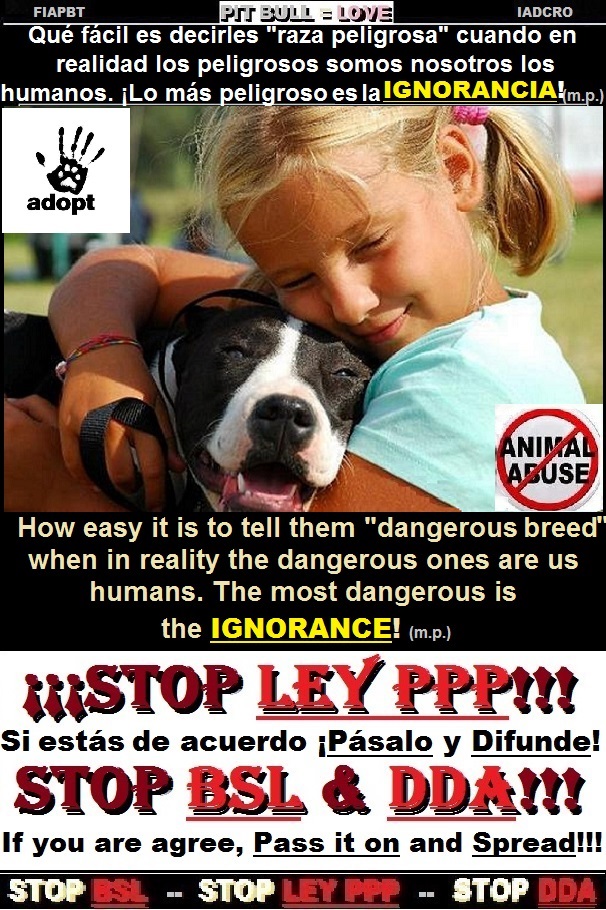 An doggie female of the breed American Pit Bull Terrier (APBT or Pit Bull) in California is being hailed as a HERO for saving a 7-month-old baby, tethering her from her diaper so as not to hurt her. THANK YOU!!! https://www.facebook.com/FIAPBT/posts/10157220172826133?__tn__=-R

And this kind of news, Why do not they get it in the media ???? Only the morbid, sensationalism and LIES...  http://www.iadcro.com/mentiras.html

The Pit Bull called Sasha, is another HERO, ´SHE RISKED ITS LIFE TO SAVE THE BABY!!!

The Pit Bull Dangerous????  How many IGNORANCE rolling around…, The Pit Bull, ´Are ADORABLE!!!  http://www.fiapbt.net/30yearswithfiapbt.htm `STOP BSL & DDA!!!

The BSL is a MURDER Law that KILLS animals, since it unjustifiably CRIMINALIZES and without ZOOTECHNICAL RIGOR any to the canine specie. The BSL is a DISCRIMINATORY, UNFAIR, INEFFECTIVE, CRUEL Law that encourages IRRESPONSIBLE TENURE. The only objective of the BSL is the RAISE MONEY for the pockets of 4 CORRUPT politicians, instead of generating citizen and animal SECURITY and all this that we affirm we do referring to the facts since the BSL was created 27 years ago, more than enough time as to affirm without fear of being wrong all the above. In addition, the scientists ethologists, and other professionals around the world of dogs along with the statistics of attacks of dogs to people give us equally the reason. http://www.fiapbt.net/30yearswithfiapbt.htm

´STOP BSL & DDA Laws!!! - Can you imagine that social laws will made by the appearance of people and not by their bad behavior? This would be madness, a great INJUSTICE, totally INEFFECTIVE and even a huge CRUELTY before those to whom this Law was applied only for its appearance without having done anything wrong, ´Do not you think? Well, this huge MADNESS UNFAIR, totally INEFFECTIVE and of enormous CRUELTY, ´It is a REALITY!!!

It is a reality in the well known as the BSL & DDA Laws, which are based on a money RECAUDATORY mode to fill the pockets of 4 CORRUPT politicians without offering citizen nor animal SECURITY, this BSL & DDA Laws being governed by appearance and not by bad behavior. Yes, you read very well... https://www.facebook.com/FIAPBT/photos/a.451449941132/10156965621926133/?type=3&theater

How have you been understanding what kind of judicial power and governments we have???? Well, in case you did not know now, you already know it.

- WHAT IS THE UNFAIR, INEFFECTIVE and CRUEL BSL & DDA Laws? http://stopbsl.org/bsloverview - https://www.facebook.com/knottytoysforgooddogs/posts/1289752464417363

- CONCEPTS to DEMAND the BSL or DDA:

- The breed dog American Pit Bull Terrier (APBT or PIT BULL), is of all those breeds that undergo criminalization and discrimination, the breed dog more persecuted and more mistreated with difference:

@ The REAL NATURE of the American Pit Bull Terrier (APBT or PIT BULL) photographed throughout of the history. Is better an image than thousand words: http://www.fiapbt.net/fotosbuenas.html

@ 16 examples what comes perfectly to demonstrate who is actually the dangerous in everyday life day after day, `The Dangerous are the people!!! https://www.facebook.com/FIAPBT/posts/10155196351201133

@ INFORMATION that the RESPONSIBLE OWNERS of dogs SHOULD KNOW, for to know defending adequately to his doggies it be one or the other breed dog, since the BREED, the MONGREL CROSSING or the SIZE it is not important, the important thing is the OWNER´S RESPONSIBILITY, just like they do or should do the parents with their children: http://www.fiapbt.net/30yearswithfiapbt.htm

- What can I do for to help against this INJUSTICE? http://www.iadcro.com/iadcroinformation.html - http://www.fiapbt.net/manualdefense.html

We have gladly watch as the new generation of Pit Bull and the animal lovers in general, already are coming stomping strong in many parts of the world, which they are the future and hope of this noble and wonderful breed dog and all those animals that also suffer DISCRIMINATION and ABUSE (BSL Dogs, Bulls, Greyhounds, Roosters, Dolphins, Elephants, etc.) THANK YOU!!!

@ Ariana, the Little Trainer of Pit Bulls in Portugal: http://www.fiapbt.net/ariana2.html