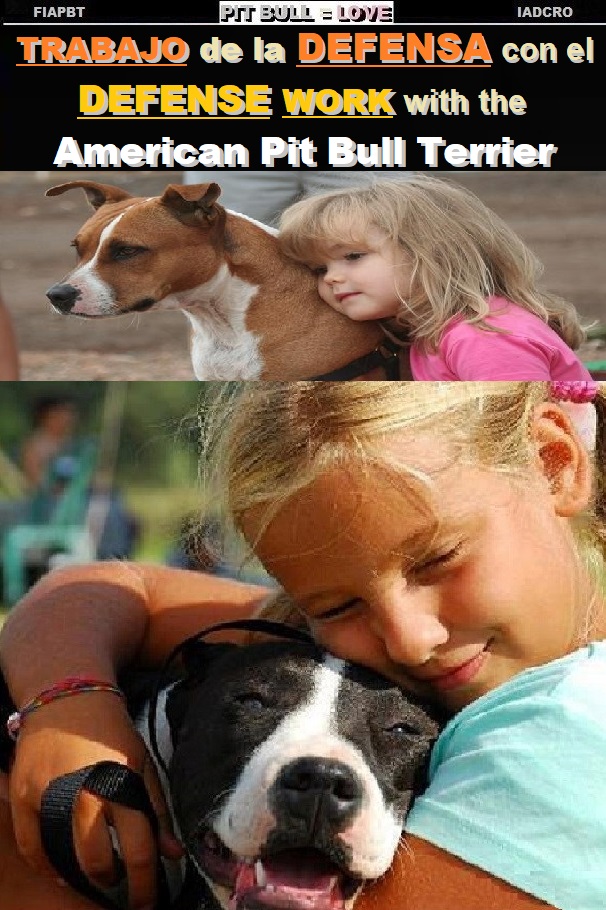 I would like to say something that I consider quite important, which should be very clear both for this topic that we are dealing with today, and for the rest of the issues related to the breed dog American Pit Bull Terrier. For example, when I refer in any of my books, articles and reports to the breed dog that is the protagonist of the report or topic in question, the American Pit Bull Terrier (APBT or Pit Bull), make it clear that I always refer to the AUTHENTIC Pit Bull , the PURE BREED; I am not referring to a mongrel dog and that some people call a Pit Bull; Nor to another dog of a different breed, which physically has a resemblance to the Pit Bull and some people call it Pit Bull; Not even a dog whose ears were cut off and because of that stupidity others say that it is a Pit Bull; Not even any dog, which has attacked a person and the lying and sensationalist media call it Pit Bull, in this way, ensure that they will generate an audience coming from their bastard and False news; Nor am I referring to any other dog, which, for reasons similar to those described, is also called a Pit Bull. And to say that all purebred or mongrel dogs, all animals or whatever they are, have my respect, my support, my love and my understanding, but to be serious and avoid misunderstandings, I think that everything should go in its corresponding drawer.

Before getting into the subject of this report, the Defense, I would like to say something in a complementary way. The breed dog American Pit Bull Terrier, dogs popularly known in society by its initials APBT, or as Pit Bull, was declared internationally in the year 2000, as the Breed Dog of Work - Sport par excellence and also as a very Beneficial Breed Dog for the Humanity, having recorded this for more than 500 years, precisely since these doggies originated as a breed dog (depending on the time and place where they were found, they were called by different names to identify them, even in the case of the same dogs) , and they did it in all those disciplines and modalities of Work and Sports where they were needed and required, to be used with extraordinary success in each and every one of the various tasks in which they were entrusted, either as; Dog extracting Coal from the mines of Ireland; As a dog of the Butchers; As a dog for the extermination of large pests of rats; As a Defense and Herding dog for cattle; As a dog for big and small hunting; And already in more modern times, used as a military dog; As Dog Actor; As a rescue dog for people; As a therapy dog, being used with all kinds of special children, the elderly, terminally ill, depressed patients and all kinds of pathologies; etc., etc.

For these and other reasons, it was an important objective within the selection of breeding since long ago, to achieve in a more than enough and effective way, the various goals that many of the dog owners of yesteryear set for themselves to find a breed dog of Work, which, outside ALL TERRAIN and Versatile, in this way, being able to carry out whatever is assigned to it, no matter how different and diverse tasks are entrusted to it, a dog breed that adapts as well as possible to any type of work, without matter how hard the tasks are circumstances for its realization, where the conventional dogs of the time did not perform as they wanted. In that breeding selection, there was also a good Functional Physiognomy, Tenacity, Courage, Intelligence, Ability, Resistance, Strong Mandibular Pressure (prey), good bone constitution, very well developed Senses and, above all, a balanced Character of the animal with the people, especially with children, in this way, to be able to carry out all kinds of Work, such as some of those described above in the previous paragraph. 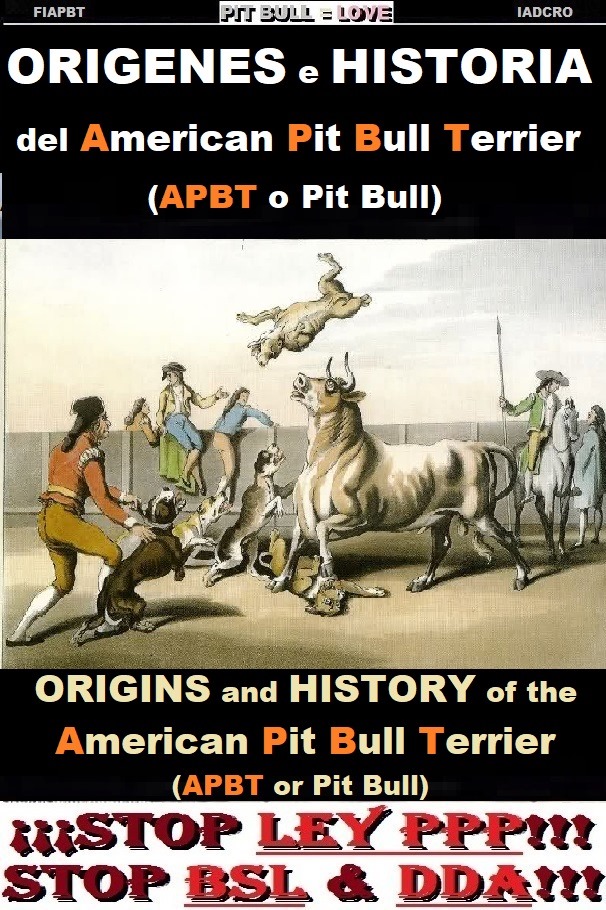 There is a Work well unknown by society, which Pit Bulls perform perfectly, I mean family DEFENSE, the Protection of its own family or herd. In addition, to perfectly carry out this Defense work, unlike other breeds, Pit Bulls DO NOT REQUIRE ANY TRAINING, since the Defense Service of its family or pack is inherent to the authenticity or purebred nature of the Pit Bull. American Pit Bull Terrier, they carry it in the genes, in the very essence of the breed. Pit Bulls, when they have matured and have stopped having the puppy mentality, have plenty of intelligence and intuition to understand when one of its pack is in danger and they must act immediately. There are even cases that Pit Bulls have defended people without being from its family or herd. We are talking about dogs belonging to a breed dog that are extremely intelligent, only those who have had them know what I am talking about. However, and even being quite rare, there may be exceptions to the rule, as in everything.

There have been several cases where an authentic or purebred Pit Bull has fully effectively defended a member of its family at home against the surprise entry of the criminal aggressor. Some owners of those Pit Bulls, later declared, that they were very surprised by the reaction of their doggie against the aggressor, since their doggies being such good, noble, sociable, kind dogs and even clowns of how funny they are, typical of the purebred, they would never have imagined that they would defend the family against an aggressor if necessary and even less, doing it in such a forceful and effective way.

What should not be confused, and which is often confused, is the work of the GUARD with the work of the Canine DEFENSE. DEFENSE is the Protection of a member of the family, as I have already explained, which has nothing to do with GUARDING, which is, for example, Keeping or Caring so that a house, a farm, a store, a gas station, a jewelry store, etc. and when there is no one to defend. 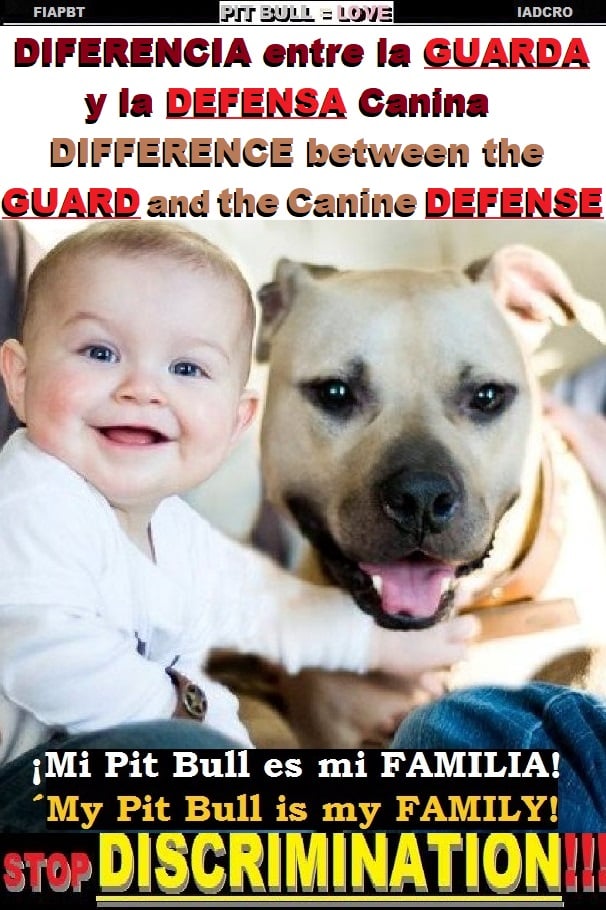 They say that they are going to remove the acronym PPP (BSL in Spain), but they put other different acronyms, And what is the use of that if it is not just to justify the Collection and make itself the clueless? And what about the DISCRIMINATION that they were going to eliminate??? With so many requirements that have to be carried out under the regulations of the new Law of alleged Animal Welfare, obviously going through paying money for each of these types of regulations imposed, DISCRIMINATION will be increased considerably!!! They need to DISCRIMINATE to Justify the Collection in the eyes and the little brain of those without Personality or Criteria, the sheep in short. They take us for fools and say it to our faces...

@ WORKS and SPORTS with the American Pit Bull Terrier: https://www.fiapbt.net/5.html 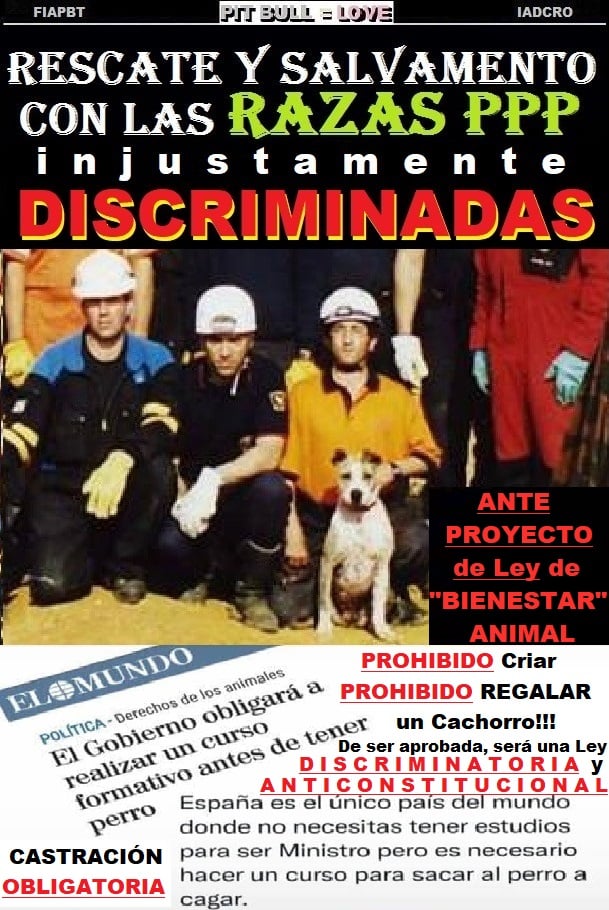