ACE SPORTBULL'S "VENUS" was the first to get the title in Spain and Europe in this discipline. 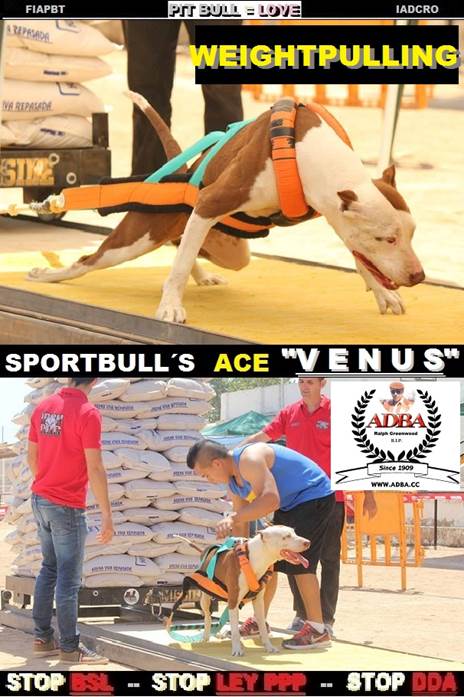 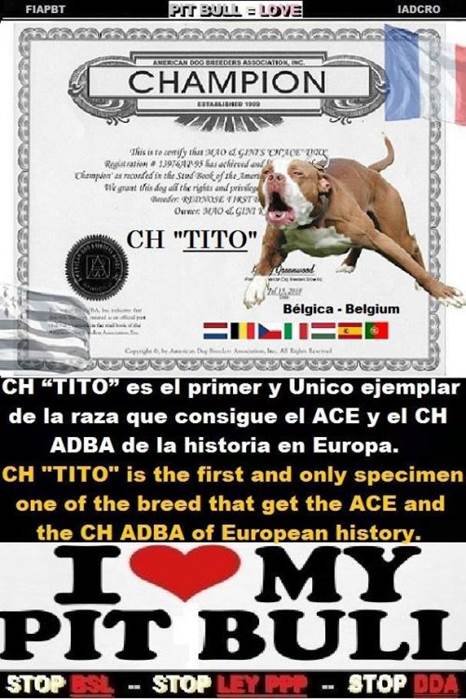 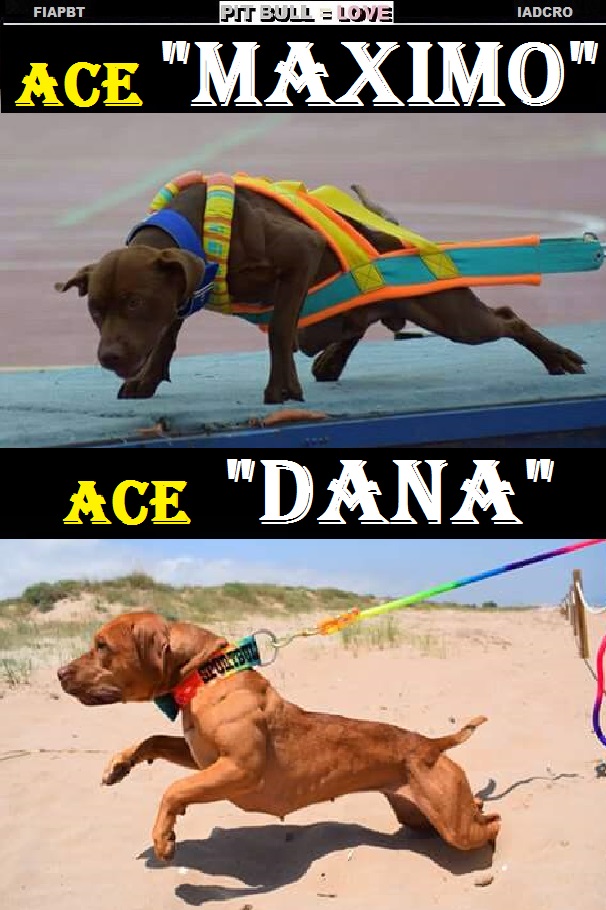 From the FIAPBT & IADCRO, we would like to congratulate to Dario and Anthony James, owners and founders of SPORTBULL Kennels and MAO & GINI Kennels respectively, by the extraordinary and hard effort they have made for decades with their American Pit Bull Terrier, to properly develop the Sports work in the discipline of WeightPulling, having achieved with the effort of their enormous work and with their Pit Bulls what nobody had previously achieved in Europe.

We also highlight the most important, the enormous RESPONSIBILITY that the two have shown both in the owners facet, as in the coaches facet of their dogs, having been concerned at all times of the physical and psychological well-being of their dogs in all aspects to have consider. As proof of this, you just have to see how well cared for they have their dogs and how much their dogs love their owners. To both, ´CONGRATULATIONS and THANK YOU!!! 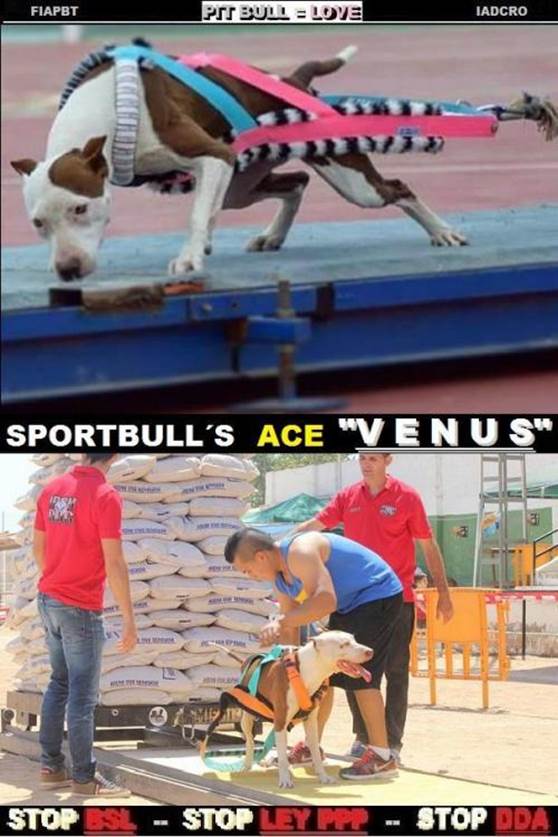 -- ACE “VENUS” --  // AMERICAN PIT BULL TERRIER LEGENDS OF THE PRESENT HISTORY. The Only 4 Champions (ACE) of WeightPulling in Europe // ACE "VENUS" was the first ACE in Spain and in Europe.

CH ACE "TITO", which is the first and only specimen one of the breed that get both the ACE and the CH ADBA of European history. 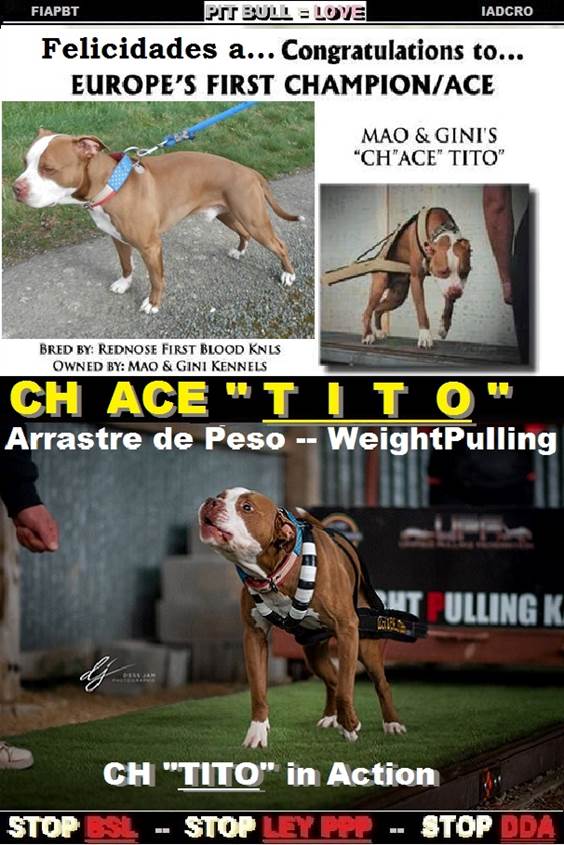 It is worth mentioning the Pit Bull called "RED TOTEN" (son and grandson of "RED PIT"), which got the Spain record in this work discipline of WeightPulling, when pull 2100Kg., Weighing 20kg. and obtaining a coefficient of 105. This result was got the day after "RED TOTEN" was just one year old, in the official Championship that took place in Oklahoma, on October 11, 1999. 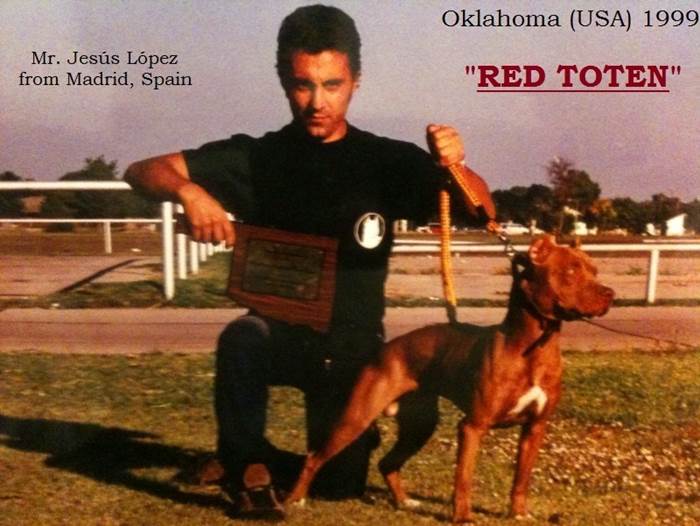 "RED TOTEN" together with its owner and trainer Mr. Jesús López from Madrid, were one of the pioneers in Europe in this sport discipline of the WEIGHTPULLING and not in vain the only 4 existing ACE currently are direct family of "RED TOTEN", being all of them equally RED NOSE like the Patriarch of these 5 specimens, I refer to "RED PIT", which had an enormous transmitting force of its genes to its descendants, much greater than that of the females that it covered. http://www.fiapbt.net/ripredtoten.html

I feel very excited, very grateful and very proud of all... ´Congratulations Champs!!! THANK YOU!!! 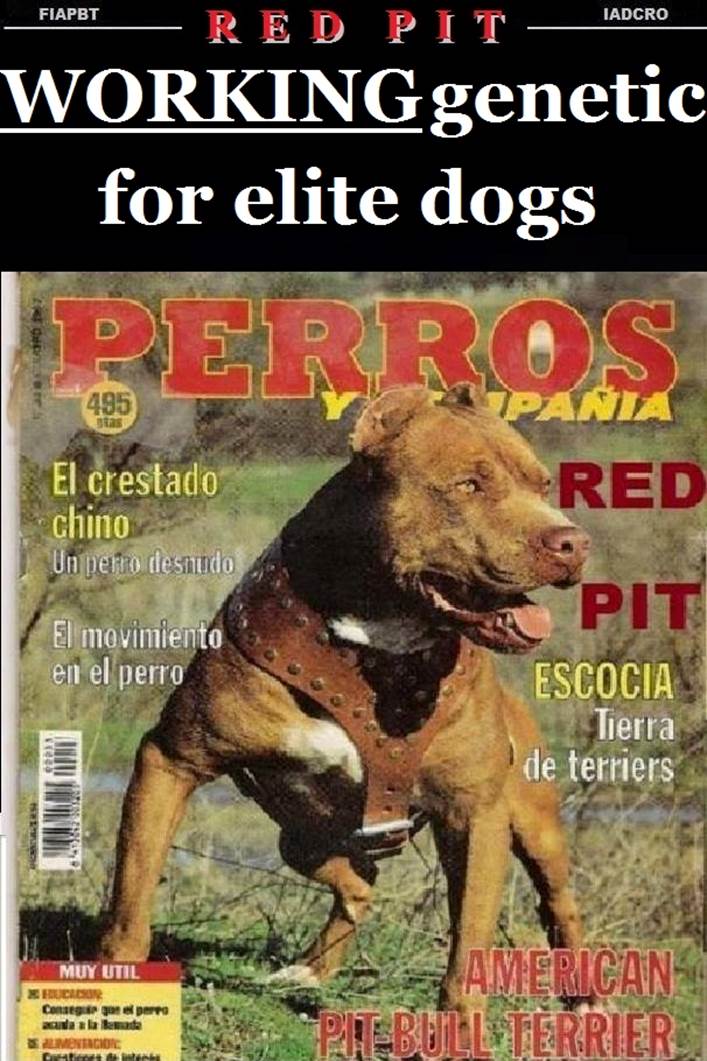 TRIBUTE IN VIDEO TO “RED PIT” WITH NEAR 15 YEARS OLD.

“RED PIT” is a magnify one of the breed dog American Pit Bull Terrier. The more important of “RED PIT”, aside from being a magnify specimen one of this breed dog, is like reproductive stud dog, transmitting its genetic to its descendants to a greater extent than the females that it covered. “RED PIT” has in its genetic a 75% of the Maurice Carvers dogs. Her grandmother Lee´s "Daisy", is 100% the Maurice Carver dogs.

The MARATHONPIT, modality of SPORTS WORK 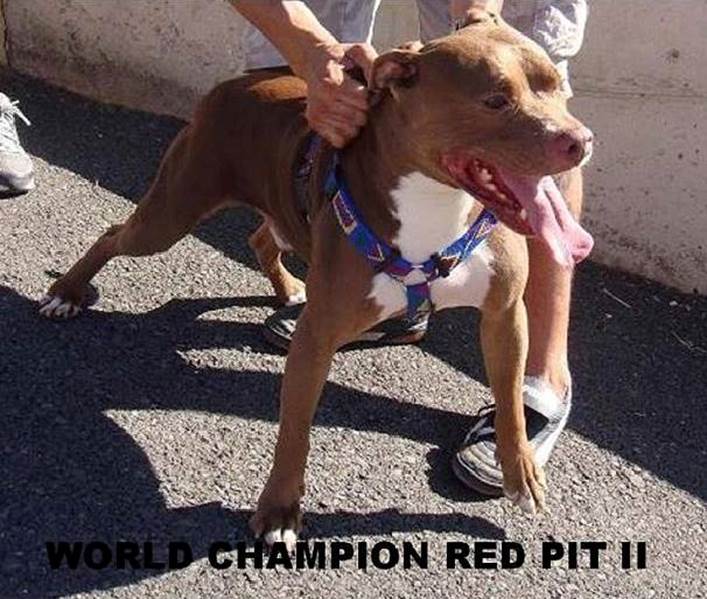 CH “PATCHES” is grandson and great grandson of “RED PIT”

CH “PATCHES” is Champion of Spain and from Europe of MARATHONPIT 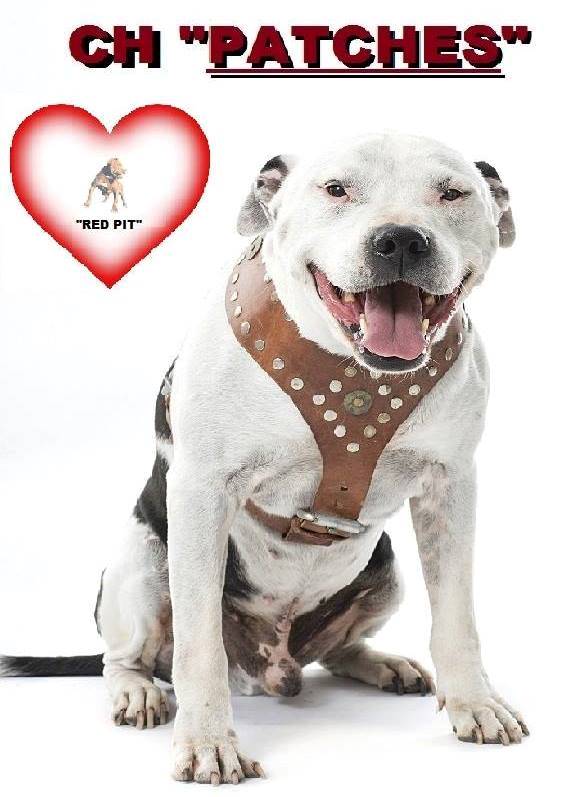 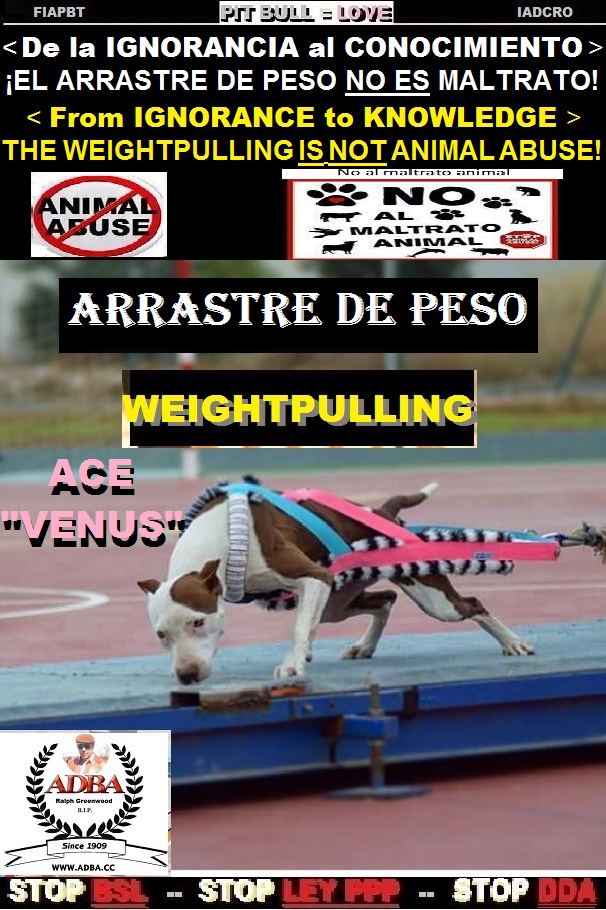 << From IGNORANCE to KNOWLEDGE >>

THE WEIGHTPULLING IS NOT ANIMAL ABUSE! It is about playing sports to entertain and exercise the animals together with their RESPONSIBLE owners, it is HEALTHY ENTERTAINMENT for all. ´THE CLEAR THINGS!!!

And what do you think the American Pit Bull Terrier (APBT or Pit Bull) can feel when they exercise with joy and spend time with their loved ones? Well, lots of HAPPINESS and LOVE !!! How many doggies would like to live even half of how the Pit Bulls who compete in Weightpulling live...

In any Official Weightpulling Competition, NOBODY mistreats or obliges to the dogs in any way to Pull, they do it because they like to exercise and they do it enchanted, also they need to exercise since they are work and sport dogs. Moreover, if someone made the slightest gesture of mistreatment towards their dog in the competition, they would be disqualified and strongly criticized by the Organization and by the other healthy and sporting participants for having made such a gesture of abuse.

The Pit Bulls that perform this sport of Weightpulling LOVE to be able to do it, but especially LOVE with all it soul to its owners to offer them this kind of life spending a lot of time exercising and having fun with them, for some good reason will be, True?

If this sport offered the slightest mistreatment I tell you that we would be totally against it, ´Do you doubt us? In the FIAPBT & IADCRO all those who know us know very well that we are among the first against the Animal Abuse in any of its forms and in this matter that we are dealing right now here, if there were, it would not be an exception for us to act against it, but it is that in this case it is the opposite, because if you do not exercise the Pit Bull is when they are mistreated because it is the Dog Breed to Work for Excellence and they need be worked with LOVE. I think what happens is that some simply ignore this facet, just that.

Just as the sport of weightpulling could also seem to some people animal abuse, when to observe that the dogs carry that scandalous harness, but they should know that this harness does not weigh anything and is padded so that the doggie is as in a mat, it is simply a matter of KNOWLEDGE :-)

Those who ignored this brief information that I have detailed right now, I tell them to stay calm, because the owners of Pit Bulls that compete in this Sports discipline, LOVE their animals as much as parents to their children and will not allow their animals any kind of damage happens to them, so their Safety and Wellbeing are safe.